GLEIF’s verifiable LEI issuer qualification programWhat are Child Entities and How do They Relate to Other Entities?Do I need an LEI when selling shares?Business Transparency: How to Create an Environment of TrustAnti Money Laundering (AML) in Banking: Everything You Need to KnowKYC in Banking: Why It’s Important and How to ComplyCorporate Structures Demystified: What You Need to KnowASIC releases a new consultation paper about changes to its derivative transaction rulesWhat is a parent company and how does it work?How long does it take to get an LEI?ISO 5009 – Identifying organizational rolesISO 17442 – Standard for LEI code structureESRB discusses the future of LEILegal Entity Identifier (LEI) vs Tax Identification Number (TIN) in AustraliaWhat documents are required for LEI registration in Australia?Who is an LOU in the LEI Dimension?GMEI vs LEI RegisterLapsed LEI – Why should you keep your LEI active?Who is an LEI Registration Agent?Are LEIs public?What is LEI transfer?Can an individual have an LEI?Who Needs An LEI Number?Do LEI numbers need to be renewed?Why is an LEI number required?How much does an LEI number cost?LEI Lookup – Fully dedicated LEI search websiteISIN to LEI mappingGLEIS | Global LEI SystemMiFID regulation | MiFID II LEIvLEIGLEIF | Global Legal Entity Identifier FoundationCompany Autocomplete by LEI RegisterOpen LEIEuropean Market Infrastructure Regulation | EMIRWhat is an LEI database?Legal Entity Identifiers in CryptocurrencyLegal Entity Identifiers in KYCDigital Identity Predictions for 2020The Future of Cybersecurity – DeloitteLegal Entity Identifiers in Digital CertificatesBroad Adoption of LEIs Could Save The Global Banking Sector US $2-4 BillionLegal Entity Identifiers for Government EntitiesThe European Market Infrastructure Regulation (EMIR) and Legal Entity Identifiers (LEIs)The FCA Will Take Pragmatic Approach to Supervising Reporting on Brexit DayAdoption of LEI in Payment Messages by the Payments Market Practice Group (PMPG)RegTech London – Event SummaryCybersecurity in a NutshellLEI deadline postponed by ASICHow to get an LEI in Australia?What is LEI-Search?LEI Register and RapidLEI Announce Official Partnership 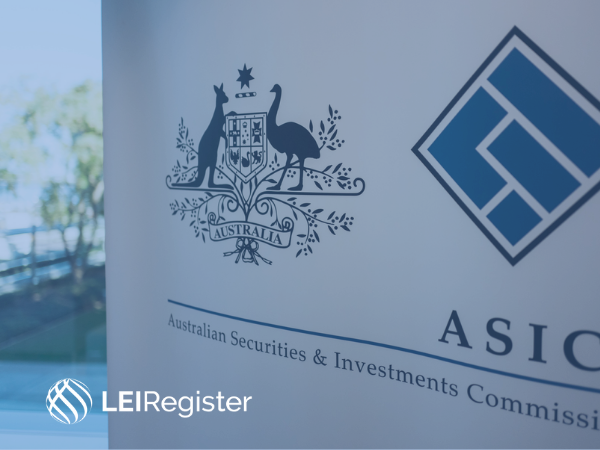 The Australian Securities and Investment Commission (ASIC) has released its second consultation paper for proposed changes to simplify the ASIC Derivative Transaction Rules.

The consultation process in the second paper is designed to help ASIC develop its policy for over-the-counter derivative transaction reporting requirements. It sets out further proposals to amend the ASIC Derivative Transaction Rules (Reporting) 2013 made under s901A of the Corporations Act 2001, following the first round of consultation, released in November 2020.

The current reporting requirements for derivatives transactions in Australia are designed to provide transparency, helping regulators identify financial system vulnerabilities and monitor market metrics. Although the requirements have proven themselves useful in the past, several overseas regulators have updated their existing rules to keep up with the ever-evolving world and implement new standards.

The rules change proposals are principally focused on implementing the harmonized international standards for transaction, product, and party identifiers and transaction data elements. Which includes:

In its second consultation paper, released on 16 May 2022, the ASIC looks to understand and assess the financial implications of the proposals and any alternative approaches for stakeholders.

We’re now waiting for stakeholders’ comments, to indicate the likely compliance costs and the possible effect on competition the proposals would have when implemented, which should be reported by 8 July 2022.

The consultation round two will be followed by round three, and the remade rules are estimated to come to commence on 1 October 2023.

Dear customer, there is a possible duplicate match between your application and Global Legal Entity (GLEIF) database. Please check the information below to confirm if this is your company or not.

In case this is your company information above, click YES to proceed to LEI renewal application. If you are sure this is not your entity, click NO and proceed with new LEI application.